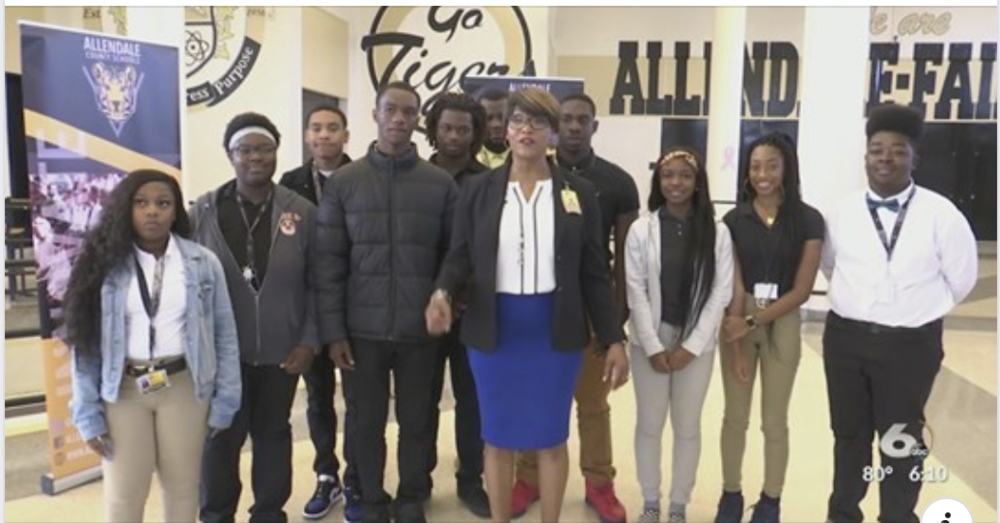 “As soon as I walked in the building it felt like home,” Allendale-Fairfax High student Savannah Joyner told NewsChannel 6’s Shawn Cabbagestalk.

Joyner is one of the success stories of Allendale County Schools. Recently, she had the opportunity to represent Allendale at Princeton University helping to shape her future after school. “I’ve learned so many different ways of journalism and they taught me so much and I learned so much,” she said. “So when I was there I was like okay I can see myself becoming a journalist,” she added.

But the narrative of success hasn’t always been that way. The South Carolina Department of Education took control of the district twice since 1999. A state of emergency was declared during the second takeover in June 2017 with several schools some of the worst-performing in the state. But then, Dr. Gilmore stepped in, helping to Change the Headlines for the better.

“We were intentional about increasing the outcomes of students’ success in Allendale County Schools,” Dr. Gilmore said.

New South Carolina school report cards revealed none of Allendale County Schools are unsatisfactory. Something that hasn’t been done in recent history. The top educator attributes success to professional development and everyone working together. “We had the community involved in community meetings, celebrating our teachers, celebrate in our students and celebrating and the employees of Allendale County Schools. So it takes a village,” Dr. Margaret Gilmore said.

Also the Allendale Six, an instructional process used to ensure champions in the classroom including:

“Looking at our education handbook data, which houses our discipline, we can see a decrease already in the number of referrals from last year to this year,” Allendale Elementary School Principal Sheila Leath said.

A house system at Allendale Elementary, modeled behind one at the Ron Clark Academy is helping establishing bonds and comradery. “The kids are of course expected to follow the rules and regulations that we have here at the school and they get rewarded for doing it,” Leath added.

Dr. Gilmore’s staff is working to move the academic needle across the district from bleak to bustling, by providing options to not only boost morale but also better prepare students for success. A Makerspace at Allendale-Fairfax High could soon assist the district with doing that.

“I can just imagine a physics teacher trying to teach you a concept,” Allendale County Schools Director of Technology Alfreda Jamison said. “Maybe coming in and building a roller coaster and then actually having enough room in here over a several day period while they’re instructing their students,” she added.

High-powered computers are already on the list of items purchased. The area plans to be open by the end of 2019. “We want to be able to address the needs of students, our staff and the community so that as they begin to prepare for jobs and things of that nature and needed to learn more about how to use technology,” she said.

“In times past, that’s when the concern for a lot of individuals feeling like they didn’t know what was happening in the school but now we don’t have that excuse because you can get push notifications directly to the app,” Allendale County Schools Communications Specialist Fateish Graham said.

With the new app, available on iPhone or Android, you are able to keep up with information for each of the individual schools in the district, including sports scores and even what your child will eat at lunch.

There is an option called “live feed.” That section gives users access to everything posted across the district’s social media channels. Documents given out by either the school or the district will also be available on the app, as well.

“It’s just another way for us to reach out to our parents and keep everyone informed of what’s happening because we are absolutely excited about changing the headlines and moving the school district forward and we want everybody to know about that,” Graham added.

It takes partnerships with the community to continue the upward trajectory.

Businesses like Golden Harvest Food Bank have partnered with the district by donating food to families in Allendale County.

A partnership with the local government is happening, too with the cities and towns in the County even adopting the slogan of “Allendale Forward”.

“When Dr. Gilmore came to town, she said we’re going change the headlines and she certainly is doing that not only without children but with our community,” Councilwoman Lottie Lewis said. “So our town council and the rest of the municipalities decided that we’re going to use that slogan as well because that’s where we are. We’re moving forward in Allendale to make it a better place,” she added.

“We are proud of it,” Allendale County Schools Communications Specialist Fateish Graham said. “When you see those signs and those banners in the, in the community, those are just ways for us to show everyone that we’re partnering with the community and we’re trying to bring the community and the school district together to move the entire community down there forward.”

It’s helping to move students like Savannah Joyner’s future, forward. “Asked me a year ago did I ever asked to go to Princeton,” said said. “I met some people from all over the country. I would have never met any of these people if it wasn’t for this school. So I represent Allendale hard. Allendale Forward,” she said.